Last weekend we saw a terrible tragedy unfold at the MCG. The Sydney Swans, who had dominated all season, fell at the last hurdle. It was awful to watch. I am referring to the emotional dissembling of the died-in-the-wool Swans supporters with whom we watched the 2014 AFL Grand Final. One of them had to go to another room, so great was their trauma.
Being a St Kilda tragic, I was full of empathy, having been in exactly the same position in 2010.
That is not what I wanted to write about, but I couldn’t just walk by the scattered remains of a seasons hopes without a sympathetic mention.

The story is first about the 2009 AFL Grand Final. All through 2009, St.Kilda were in the ascendancy and they lost only 3 games all season. So great was my expectation of finals victory, I booked flights and accommodation for September very early in the season. I reckoned that if we weren’t able to get tickets for the game, any pub in Melbourne on Grand Final Day was going to be better than sitting at home.

My hopes were realised and St.Kilda made it to the Grand Final. We were not able to get tickets from anywhere before the day but we flew to Melbourne undaunted. I said to my wife Helen “we’ll go to the ground early and surely we will pick up a couple of spare tickets from someone”.

So two hours before the game we headed for the ground. I started to practice my pitch for tickets along the way. I have done this successfully many times at rugby union tests but I soon realised this was a different game. I was met with huge laughter and ridicule. Everyone thought this was the funniest, stupidest thing, a guy walking towards the MCG on Grand Final day, expecting to pick up tickets.

I persevered anyway. After 15 minutes, Helen retreated to a safe distance, out of the drizzle and out of the embarrassment zone. She said she was praying. I approached anyone that looked like they had a ticket in their hands. Half past one came and with it rising anxiety. Two o’clock came – nothing. Ten past two passed with no result and the situation was getting a little desperate. With only 15 minutes to go to kickoff I started to consider Plan B – a dash to the nearest pub. I decided to hold on for 5 more minutes. We heard the cheer as the teams came out . We heard the National Anthem being sung. “Just one more lap” I said to myself, of a forecourt by now almost empty.

“Are you looking for something” a voice behind me said. I turned and looked at this guy and said (thinking as I said it what a ridiculous proposition). “I was hoping to buy a couple of tickets”. He took an envelope out of his pocket and said “would these do?” I looked and in his hand were two Premium Centre Square Corporate tickets. “They are yours if you want them”, he said. My eyes started to misbehave and I could barely see a thing. I remember giving him a great big bearhug and stammering “thank you, thank you, thank you” and then rushing for the gate to save both our embarrassments. Helen was happy her prayers had worked. 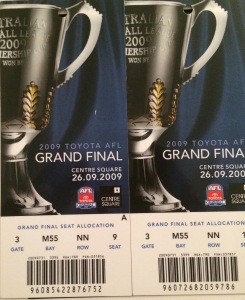 It took a while to get our breath back and for the blessing to sink in. The guy beside Helen paid almost $2,000.00 for his ticket. The seats were awesome – under cover on a rainy day with perfect views. Our benefactor had managed the corporate ticket sales programme and had a few tickets left over. He decided to look for a couple of deserving punters outside rather than burn the tickets.

You can imagine that story has been told many, many times since then. The tickets are framed and on the wall of my study, and it reminds me that faith and hope, even blind, senseless faith and hope, works. By the way, St.Kilda lost at the end of the day, but that pain pales in comparison with the joy of the victory at the beginning.

And now I come to this week’s moment of absolute clarity.

Mid-morning last Saturday, the morning of the Grand Final I got a text from a friend:

“Hey Brian, we are in Melbourne for the SWANNIEs!!!
What time did you head down to get your tickets?”

It hit me there and then – We MUST tell our stories of faith and hope!
We never know when our story can be just the thing to encourage someone to step out in faith and hope themselves – even the blind, senseless faith and hope that believes you can get tickets to the AFL Grand Final on the day!
Based on someone’s story, my friends stepped out in their own faith and hope and it was rewarded.

Have a good week, Brian

Last weekend I went on a father and son adventure. We went up to the end of Kanimbla Valley to a farm owned by Rob, and amazing man with a wonderful heart. There were nearly 20 of us – (half kids and half grown-up kids!) and we had a great time.

Rob had us herding cattle, tagging calves, trying (mostly unsuccessful on my part) to capture cows in the crush and all manner of cattleyard tasks. We took turns with chainsaws and built a big bonfire. It was wonderful. We sat around the fire, cooked marshmallows on sticks (longer and longer sticks as the heat built up) and cheered at every shower of sparks that flew into the air. It was just a glorious evening and the stars put on a boastful show of their splendour.

Then we went back to the farmhouse for a big pot of Spag Bol. We enjoyed some very nice reds over an evening of relaxed and hilarious conversation. Do you know I haven’t laughed as much for ages.

Then we spent Sunday morning digging out weeds on the side of a mountain that Edmund Hillary would have baulked at.
The boys had a ball too. The rule for the weekend was no electronics. We did not hear one complaint. But we did hear the roar of laughter, and of mini-bikes and quad bikes tearing around the farm. And the boys really got into the cow herding and calf-chasing. There was a less enthusiastic response to the weeding, but as we adults had to ‘provide a good example’, we kept digging.

I spent a couple of peaceful hours on the Sunday just sitting in the middle of a paddock reflecting on what really mattered and I cannot remember the last time I did that. It was probably the simplest and most enjoyable weekend I have had this year. We can get so wrapped up in our fast-paced worlds with our phones and devices rarely more than an arms-length away.

My moment of clarity this week is to book a regular technology-free weekend and go do some of the simple fun things we used to do before email, mobiles and the world-wide web. Or am I showing my age…?

Have a great week. Brian.

I welcome your feedback:

I spoke at a business breakfast a few weeks ago and the process of preparing for it was quite challenging. I have come to realize that many of the perspectives that I have traditionally relied on have basically been blown out of the water.
I spoke on “Let What Matters Most, Always Matter Most”. Right now my wife Helen’s Dad is dealing with cancer after 83 years of hearty good health. At the same time my lifelong friend in Ireland, Aidan, (Mono to his friends) is fighting cancer. He is just a very little further past 60 than me.
Add to this the disturbing events that are happening in the world at the moment, and I am left reflecting a lot on the question “what really, REALLY matters to me…”
A particular photo of a Mum and child standing on ruins in Eastern Europe also brought me up short. I have been clear and settled on my political position re the Middle East, but seeing that picture profoundly challenged me.
In truth, it is far less about political positioning than it is about people. It is people that matter to God, and at the core of my being, it is people that matter to me.

I am starting to see that over the years I have become immersed in world affairs and things political and economic that I can have absolutely no control over, but they end up stealing my peace and making me lose sight of what really matters and where I can have some influence for good.

So my moment of Absolute Clarity this week is to keep coming back to what really matters most, and to make sure that they always matter most.

Have a good and perhaps reflective week. Brian.

Get Your Free E-Book